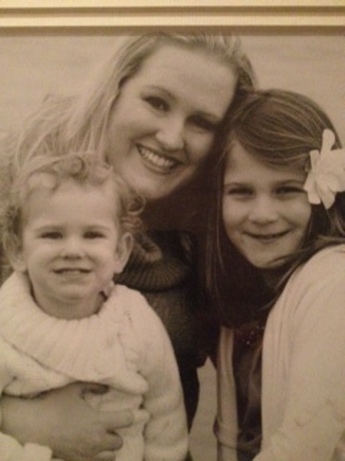 When I was almost six I remember filling out one of those “All about me” type sheets for school. I remember asking my mom how to spell basketti (spaghetti) when filling in the favorite food section and answering the question “what do you want to be when you grow up?” I put two things down…a mommy and a teacher.

I proudly displayed my hand- made dedicatory poster and introduced myself to my fellow kindergarteners. I’m sure it was in my head, but I thought they ooo’d and ahhh’d when I told them about the turtles that lived in my grandma’s backyard and how I had two wiggly teeth. It was all very impressive.

“How many kids do you want to have when you are a mommy?” Mrs. Grubbs asked.

“Six.” I replied without hesitation. I smiled back innocently. She laughed a little and told me that was a lot of kids, but she was sure I could handle it.

For years I kept that number in the back of my mind, convinced that I’d have a big family. Rarely…usually after babysitting a group of hellions, like the Palmer’s…. (don’t worry I changed the name to protect their reputations… wink, wink) I’d consider dropping it down to four….but for as long as I can remember I’d wanted a big family and nothing more than to be a mom.

But God had a little detour set up for me.

I found out early on in my marriage that conceiving would be difficult if not impossible. I was determined to prove everyone wrong…I’m stubborn like that. I believed in miracles (and still do) and in 2002, two years after my initial diagnosis, I gave birth to a beautiful baby girl. I remember holding her all night, just staring at her. I didn’t want to sleep, I didn’t want to miss anything. It was the most incredible feeling. I thanked my Father in Heaven over and over for her.

It was that night, in the darkened hospital room, that I found myself thinking about the woman she would be; wondering if I was prepared to teach her everything she needed to know; wondering if my mom did the same when she held me for the first time. I realized, with a sense of reverence rather than anxiety, that I would know my child as a child for such a small span of time. She would grow up, and I would know her as an adult for far longer. So what did I want her to learn in those precious years? This is what I wrote down on the hospital stationary:

Love. Unconditional, unimaginable love. I want to marinate her in love for as long as possible so when she leaves home she is so full of it that it seeps out of every pore.

Laughter- I want to hear her laugh every day.

Honesty and integrity- I want her to stand up for truth

Intelligence- I want her to value education. In the end, it’s all we can take with us.

Faith- I want her to know that God is real. That He loves her, knows her, and wants her to succeed. I want her to have enough faith to carry her through times of trial and heartache.

Like all babies do, she grew, and nearly seven years after she made me a mom for the first time, I was blessed to hold another precious gift from God in my arms.

Macy turned five a couple of weeks ago which is probably why I am feeling so sentimental. She was an unexpected miracle. Her story is sacred to me.

In the years following Taylor’s birth we had attempted to adopt several times, all ending in failed adoptions. We also continued fertility treatments in the hope that if adoption didn’t happen, we could still get pregnant.

In 2008 we had been selected by a birthparent to adopt a baby girl. As it got closer to the delivery date we set up the nursery and prepared for the little one to join our family. One night as I was rocking in the nursery, thinking about the baby, a very strong, very powerful impression came to me. I can’t explain it in words that will do it justice, but I knew in that moment that we were not supposed to adopt the little girl that we had been waiting for for so long. My heart was broken as I talked to my husband about it. We were guaranteed a baby through this adoption, and now we were giving it up. It was so painful to have to tell the birthmother that we couldn’t adopt her baby, but we knew it was the right decision.

Shortly after experiencing this heartache, I received a letter from my fertility clinic stating that my lab results concluded that the treatments were unsuccessful and that I would need to go off of everything for a full year to give my body a break from the regime that I had tortured my system with for the previous five years.

I tried my best to have faith and trust God, but I knew that having faith doesn’t make us exempt from sorrow…it carries us through it, not around it.

Two weeks later, out of habit, (anyone who has done fertility treatments will understand) I took a pregnancy test. Realizing it wasn’t necessary I tossed it in the garbage immediately. As it was falling I noticed two pink lines. TWO! I didn’t believe what I saw, so I took three more pregnancy tests that day before calling my doctor. I think he was in as much shock I was.

“I’m really not sure how that is even possible based on your lab results, but come in anyway and we will confirm one way or another.”

He confirmed what I already knew. Miracles happen and God is mindful of us.
Powered by