Why I Still Believe in Santa
by Heather 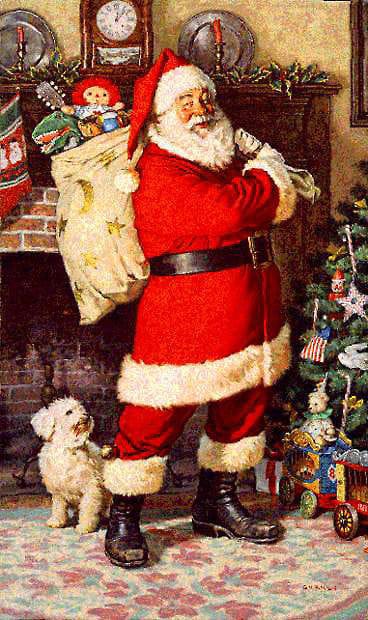 Many of my favorite memories from growing up involved Christmas. It was such a magical time of year, when the house would be filled with the delicious aromas of baking, the tree in the front room glistened with silvery tinsel, my mom’s throaty vibrato rang through the air, joined with old songs from Bing Crosby and Karen Carpenter, and the anticipation of wonderful surprises to come kept me from sleeping late into the night. On Christmas morning, no matter how impossible it may have seemed, I always awoke to a house which felt different than it did on any other day of the year. There was a trace of magic which lingered, suspended in the quiet, hazy light of morning which rested promisingly on our bulging stockings.

Another year, another Christmas Eve, and Santa has once again visited our house. Today as I watched my children dive into their gifts from friends and loved ones, their excited laughter and energy lingering long after the last paper package was torn open, I thought more about why Christmas was so special.

A visit from St. Nicholaus has always been something which I could count on, both when I was a child and even now, as an adult. It is something to dream about and hope for. And it is something that happens every year, no matter what our family’s circumstances may be.

There is a special kind of magic in the feeling of confidence in a tradition. There is also a special kind of magic in the feeling that anything is possible. Growing up, my dreams were only limited by my own imagination. My most elaborate of wishes may not have come true, but enough of the ones that really counted had, including some which I didn’t even realize that I had. Even more important to a sensitive, introspective child like myself was the fact that it didn’t matter whether or not I had been an angel all year, because Santa still believed in me. He saw the goodness in me and loved me for who I was.

When I was six or seven years old I learned a lesson about Santa Claus which I would never forget. We were at my grandma’s house for the holiday. My little sister and I slept in the basement in one of the guest rooms. I was so excited, wondering what Santa would bring me that year, that I snuck up the steep staircase to take a peek. I cringed at every creek on the stairs, my heart racing so fast that I almost gave up, wanting to turn around and go back to bed. But I was determined to finish it. Stealthily I made my way through the kitchen, weaving through the dangerously loud array of dining chairs on wheels. Finally I made it to the front room. It was very dark, except for the faint yellow glow from the nightlight which my grandma kept on in the kitchen. It was just enough light.

There, on the brown and gold patterned couch, rested my stocking with my name in felt block letters, and next to my stocking was a pair of beautiful white roller skates. I was so excited I wanted to try them on right then, but I knew that I had already accomplished what I set out to do. I had seen what Santa had brought before anyone else in the house did.

The way back downstairs was quick and uneventful. It seemed strange that it had been so terrifying only moments before. I lay in bed for a long time after that, listening to my little sister’s quiet breathing. I wanted to wake her up, to tell her what I saw, and share in my initial excitement, but something held me back. Something felt different, but I couldn’t say what it was.

Christmas morning dawned bright and beautiful, with fresh white snow covering the ground, begging to be played in. My sister woke with the usual excitement and glee, but I couldn’t muster the same enthusiasm. She scrambled up the stairs, my parents groggily following after her. It was time for the big reveal, when we finally got to see what Santa Claus had brought us. Not wanting to disappoint, I pretended that I was just as surprised as my sister at finding the matching skates. I touched them quietly, noticing for the first time that they had bright red laces and little rainbows on the sides. But I envied my sister’s enthusiasm at the discovery, and finally realized that I wished I hadn’t peeked the night before. Some of the magic was gone, and I couldn’t get it back, no matter how happy I was about receiving the new skates.

I learned a lot about Santa Claus and magic that Christmas morning. The magic of Christmas is not in what gifts you receive under the tree, although they certainly make it more fun. The real magic is in the anticipation, the childlike yearning and hope for the impossible, and the final realization that a lot of the magic comes from within yourself, in how you love and serve others.

I have always lived in a very religious home. I was raised with the firm knowledge and conviction that the true purpose of celebrating Christmas is in honor of the birth and life of our Savior, Jesus Christ. We talk about Jesus every day in our home. We pray in his name, we try to say and do the things which he would have us do, and we try to emulate his immeasurable love for those around us.

Some may find that this firm conviction to honor the birth of Jesus Christ comes in conflict with the world’s interpretation of Old St. Nick, but I do not. On the contrary, I feel they are very closely related.

Now it is Christmas night. And although we did not experience a white Christmas, it was magical just the same. It was spent with family and loved ones, with fond memories to be warmly tucked away within my heart. My floor may be covered in new toys, discarded packaging and paper, and a stack of used Amazon boxes to be recycled, but there are sweet and contented smiles on my children’s faces as they dream of the limitless possibilities of what next year will bring.

I would say that Santa did his job well. He will always be welcome at my house. 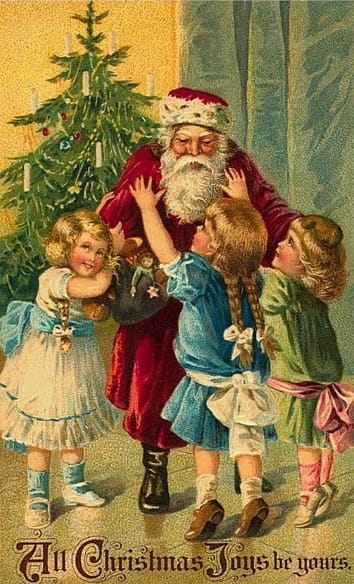